On June 29th, King Hua, 54, was driving his car in Springfield, Pennsylvania, when an SUV pulled up next to him. A Black male leaned out the passenger side window with a gun and fired two shots, killing Hua. The media is calling it a “road rage” murder.

Police have arrested Saddiq Washington, 20, and charged him with second-degree murder.

Now, police have arrested his mother, Amanda Washington, who they say was driving the car. However, she is not even being charged with being an accessory. The District Attorney’s office is already pampering her by only charging her with “hindering the prosecution” of her son. A third-degree felony that carries a sentence of 3.5 to 7 years. 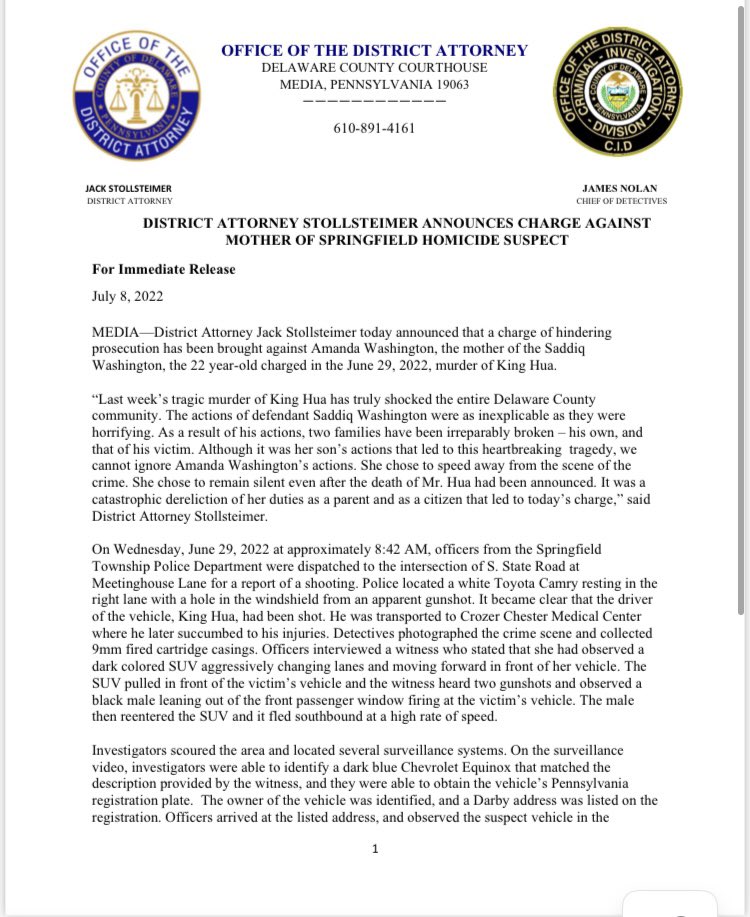 Related: Pennsylvania is witnessing a dramatic surge in homicides. Philadelphia set a new record for the highest homicide rate in city history last year. However, Chester, a majority Black suburb of Philadelphia, has an even much higher homicide rate than Philadelphia.

According to the FBI, 60% of known homicide suspects in Pennsylvania between 2010 and 2020 were Black. Despite the back that Blacks only make up about 13% of the state’s population. Spur of the moment, no impulse control murders seem to be the primary driver that is driving up homicide rates in the state. A large majority of these killings are Black on Black. However, many are also Black on White or Black on Asian.

Small outer suburb of Philly, with 33.2k people, consistently has one of the highest homicide rates in America

Chester, Pennsylvania, an outer suburb of Philadelphia, only has 32.5k residents. The city has had four homicides in 2022, a huge number for a city of this small size. However, for Chester, only having four […]

Mehmood Ansari was a 66-year-old Pakistani immigrant who owned a souvenir shop near the boardwalk in Atlantic City. His shop has been the target of shoplifting recently. Thursday evening, a mob of Black preteens and […]