Chester, Pennsylvania, an outer suburb of Philadelphia, only has 32.5k residents. The city has had four homicides in 2022, a huge number for a city of this small size.

However, for Chester, only having four homicides so far is below average!

Chester was founded in the 1600s as the town of Finlandia in the colony of New Sweden. The name was later changed to “Upland” after the province in Sweden. In the 1700s, English settlers took over the area and renamed the town Chester City. During WWII, thousands of Black workers from the south were imported to work in manufacturing jobs. The population increased by about 50%. By the 1950s, White residents were moving out. White flight continued for decades.

On February 3rd, Martin Vera Felix was intentionally hit with a car and beat to death. Jonathan Lee Autery, a Black male, was charged with first degree murder. 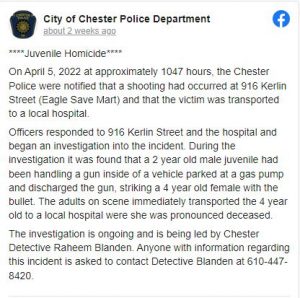 On April 5th, a two-year-old girl was allowed to play with a loaded handgun inside a vehicle at a gas station. She shot and killed her four-year-old brother.

On April 17th, two people were shot. One of them died. The media has not provided any information on the victims or the suspect.

In 2021, Chester had at least 14 homicides. This is a homicide rate of 44 per 100k. Higher than some of the most dangerous big cities in the USA. Higher than the city of Philadelphia itself.

In 2021, local media and the Chester police department bragged about how homicides were down significantly over 2020. However, multiple media reports and multiple police press releases all omitted the actual number of homicides. They only cited percentage drops. The 2021 homicide rate was still insane compared to the rest of America.

Between November 2021 and March 2022, there were at least ten gunshot victims but no fatalities. Given the insane homicides rates for 2014 through 2021, you would think that many of the city’s worst gangbangers should either be dead or awaiting a murder trial.

Virtually all homicides in Chester are Black on Black. However, Jennie Luckie, a 32-year-old White female, was murdered in 2020 when a Black male suspect fired into her car.

With only three homicides in 2022 so far, Chester could experience its least deadliest year in decades! However, something tells us that homicides will probably make a comeback by the end of the year. We will keep track of how things develop in Chester.

The radical left and the Black racial lobby absolutely loves to portray violent fleeing suspects as innocent victims of police brutality. This has been going on for decades. The reality is that fleeing suspects kill […]

Yet another former NFL player suspected of committing murder … Why does this keep happening?