Twitter once again proved that it is more of a publisher than an open platform. They stripped Christopher Rufo, who has 222k followers, of his blue checkmark.

Rufo writes for the New York City Journal and the Manhattan Institute.

Rufo appears to have been stripped of his blue checkmark for a series of tweets attacking Critical Race Theory. This is a derivative of Marxist Critical Theory that seeks to radicalize non-Whites by encouraging them to blames all their shortcomings on White people.

Critics of Twitter argue that the use of blue checkmarks to endorse content is a direct violation of Section 230 legal protections they currently enjoy. There have been unsuccessful lawsuits against Twitter over BLM, Antifa, and Jihadist violence that was promoted on their platform. Imagine the tidal wave of new lawsuits if judges begin ruling that Twitter no longer constitutes an open platform. Since Twitter censors some accounts, are they not negligent for not censoring accounts that openly advocate violence? 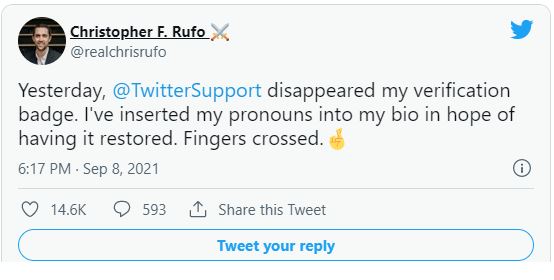 Giorgia Meloni is the leader of Fratelli d’ Italia, or Brothers of Italy. They are polling in first place in Italian polls. After the September 25th election, she is expected to become Italy’s first female […]

EU Commission Meme Report: Its Not Funny Any More

This report actually came out last February, but no one even noticed it. Here is a link to the 18 page PDF file. Paul Joseph Watson made a video about the report where he portrays […]