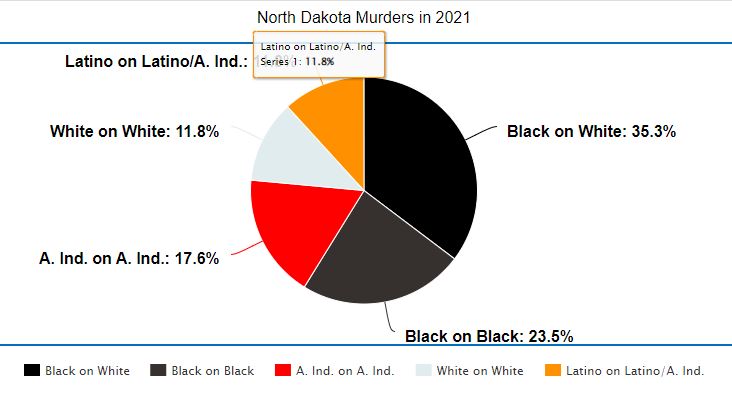 The ND Attorney Generals Office lists of 17 homicides for 2021. A total of 58.8% were committed by Blacks.

Note: The 64.3% for 2021 might be counting a murder charge for an unborn baby that was not counted as an official homicide by the Attorney General’s office.

Note: Latino suspects are classified as White in this data.

Of the 17 homicides in 2021, 16 were cleared, which is a very high clearance rate. The 17th is a Black on Black homicide occurring at the Africa Restaurant and Nightclub in Fargo. However, no suspect has been brought to justice. Three homicides occurred on Indian reservations. Fifteen people have been arrested. Two of the homicides were committed by the same Black male. This suspect is also charged with a third count of murder for killing an unborn baby. However, the Attorney General’s office does not count this as a homicide in their official list.

Offender/Victim Race for all 2021 homicides:

June 4, 2021, Fargo, North Dakota. Jupiter Paulson, a 14 year old White female was killed by being tortured for thirty minutes. Arthur Prince Kollie, a career criminal from Liberia, has been convicted of the murder.

On October 9th, a Black male gunman killed two Black males and a Black female. A fourth victim was shot but survived. Tanija Turner, 19, was among those killed. Her family says a “parking dispute” […]

On June 4th, 2021, 65-year-old actress Lisa Banes was hit by Brian Boyd, 26, as he rode on a scooter. He had no driver’s license, and the scooter was unregistered. Boyd fled the scene. Banes died […]

Taahviya Chapman, 24, has been charged with murder, attempted murder, and numerous other crimes. She rammed her van into her boyfriend Jawon Khalid Lunsford. She had been reading his text messages to her sister. She […]