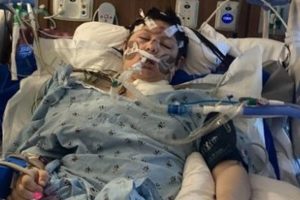 On the morning of June 4th, Jupiter Paulson, a 14-year-old girl, was attacked in front of a Fargo, North Dakota strip mall. She was skateboarding from her father’s house to her mother’s house at the time. She was beaten, strangled, and then stabbed over twenty times.

A witness says Arthur Prince Kollie, a 22 year old Liberian, was stabbing and strangling her. The suspect ran from the witness, who called 911. Paulson was pronounced brain dead four days later. Kollie was charged with assault, robbery, and murder.

Kollie, a habitual offender with multiple felony convictions, was supposed to be in prison at the time.

In 2017, Kollie was convicted of a felony for an attack on a female worker at a juvenile corrections facility. He was sentenced to a year. The judge gave him credit for 176 days of time served and stayed the rest of the sentence.

In 2019, he was sentenced to a year in prison for multiple probation violations. In late 2020, he began racking up new charges, including felony gun crimes. On May 7th, 2021, he was sentenced to two years in prison. Yet he was out of prison so fast, he was able to slaughter Paulson less than one month later.

Homicides are surging nationwide, in part because criminals are not being held accountable for lesser crimes.

Kollie says he was high on methamphetamines and does not remember what he did that morning. On October 25th, he pleaded guilty in court. However, hours later, he retracted his guilty plea and made a rare “Alford plea.”

An Alford plea means that he admits no guilt but concedes that there is enough evidence that a judge or jury would likely convict him.

Fargo has a significant Liberian “refugee” community, who were “resettled” in the city using federal tax dollars. New “refugees” were still being brought to Fargo as recently as May of  2021. Lutheran Immigration & Refugee Services [LIRS] is currently involved. Lutheran Social Services of North Dakota [LSSND] was previously resettling people in Fargo, but that entity declared bankruptcy at the beginning of the year.

Jessica Thomasson, the former head of LSSND, is now the executive policy director of “Family Stability and Community Inclusion” for the North Dakota Department of Human Resources.

The constant brazen criminal activity in Minneapolis is getting worse and worse. A mob of young Somali males stormed an apartment complex and brutally assaulted a mother and daughter who lived in one of the units. The […]

The accused “train rapist,” Fiston Ngoy, is an illegal alien from the Congo who was previously convicted of a sex crime. Ngoy originally came to the USA as a student in 2012 but has been […]