It is important to note that there are rival factions inside of the Antifa movement, and these factions occasionally fight. This fighting can range from online criticism and gossip, to brutal street battles.

These battles usual occur between older, more established Antifa groups, and the newer ones. The older groups often accuse the newer groups of being reckless amateurs who don’t know their place within the violent movement.

Corvallis Against Fascism [CVA] is an Oregon Antifa chapter that is part of Torch Antifa Network [Torch]. This network is largely made up of older Antifa groups, some as old as the early 1990s. In March of 2018, Torch was involved in street fighting with rival Antifa chapters in Grand Rapids, Michigan and Nashville, TN. In Grand Rapids, the Great Lake Lakes Antifa Network [GLA] say Torch members launched an ambush on them after pretending to be friends. One member of GLA had the back of his head split open with a metal police baton, requiring hospitalization and stitches. A young black male, who was associated with GLA, made a video claiming Torch members called him the “n-word” during the attack.

There were no “right-wing” or even conservative organizations present. Some clickbait websites are claiming members of the Proud Boys were at the park. The alleged Proud Boy members were part of a demonstration almost ten miles away.

Antifa brutally assaulted street preachers, which was reported by Portland’s CBS affiliate KOIN Channel 6. They also assaulted many other pedestrians. Several assaults were captured on video.

This assaults culminated with a 65 year old man, Dennis Anderson, being followed for blocks by armed Antifa. Eventually an man in Antifa black bloc apparel fires at him at least seven times. Anderson appears to fire a pistol once. Antifa then impede the crime scene investigation and Portland police are accusing them of stealing crime scene evidence.

Despite promoting the rally beforehand, CVA is now denouncing the violence carried out by Portland Antifa. CVA is accusing them of attacking “marginalized people,” including the “homeless and mentally ill.” They say Portland Antifa are engaged in the “same violence against mentally ill people as the cops.”

At least one victim of Antifa violence, near Waterfront Park, was a homeless man living in his car. 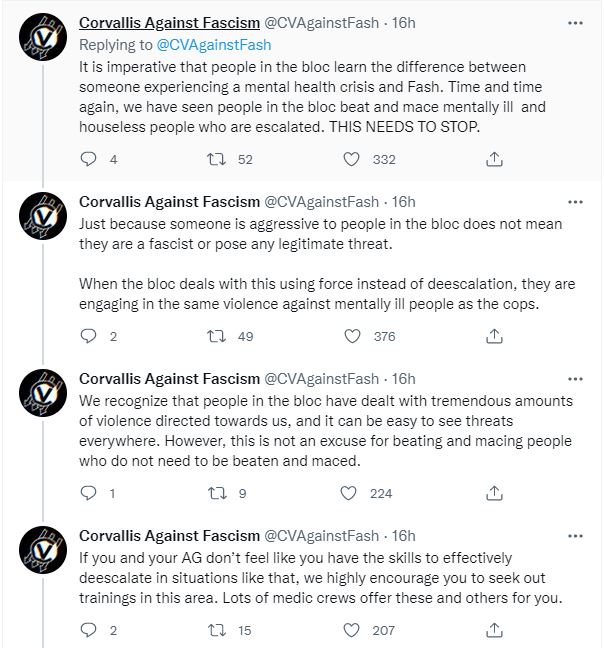 The violent legacy of Portland Antifa:

On October 12, 2019, Sean Kealiher, a 19 year old high profile Antifa, was killed during a battle near an Antifa hangout. He was crushed to death between the Democratic Party headquarters and an SUV. The SUV had bullet holes in it. No Antifa called the police, and Portland Antifa Twitter accounts ordered members not to talk to police about it. Eventually a lawyer for one of Kealiher friends stated that his client fired shots at the SUV “in self-defense.” Antifa publicly conceded that the Kealiher was not killed in a fight with any kind of right-wing people. His murder is still unsolved as none of the participants will provide any other details.

Kealiher was probably killed by rival leftists. He is one of three people (not counting Portland Antifa member Reinoehl who was killed in Lacey) associated with Portland Antifa that are known to have have been killed violently since October of 2019. There is no evidence that any were killed by right-wingers.

On August 29th, 2020, conservative activist Aaron Danielson was shot and killed execution-style by self-described Antifa member Michael Reinoehl. Antifa rioted during a pro-Trump demonstration. Video shows a group of people stalk Danielson, surround him, and then aid Reinoehl in escaping.

Reinoehl was later shot and killed in self-defense by US Marshalls in Lacey, Washington.

Some of the NUMEROUS video clips of Antifa attacking people in and around Waterfront Park rally, August 22nd:

Portland’s LARPing Antifa were hassling a vet so I thought I’d capture that. As you can see, my phone here’s hit. Someone shoved me violently from behind, and an ersatz Sgt-at-arms hustled me away. I told him I expected better from such a nice boy. # pic.twitter.com/UJSm6wDTd1

PORTLAND- ANTIFA bear mace an attendee of their protest because of his tattoos and shirt.

He said he was there in support.

ANTIFA shared that due to his appearance they didn’t trust him and bear maced him before chasing him out. pic.twitter.com/WIVsQRq424

ANTIFA members harass an elderly man who has a “Don’t tread on me” flag attached to his vehicle.

An ANTIFA member tried to rip his flag off and threw an egg at his car as he tried to drive away. pic.twitter.com/KkElP4yKax

A street preacher was just attacked by ANTIFA pic.twitter.com/NVausVJad8

Antifa surrounded & threw liquid on an older woman who was walking her dog in downtown Portland. They tell her where to go but she refuses. She points out that “press” are there watching but the antifa laugh & say they’re with them. Video by @DrewHLive: pic.twitter.com/p1aCK16kJ7

A person at the waterfront antifa autonomous zone in Portland attacks @TaylerUSA (who is wearing press markings) with a chemical spray in a completely unprovoked assault. pic.twitter.com/hawV2BhTDO

Breaking:
22 Aug. in downtown Portland: An antifa support vehicle with covered license plates drives up to the occupied area so that antifa can unload riot gear. Notice the antifa flag once again. Video by @DrewHLive: pic.twitter.com/Sb9kCTUQqc

Antifa started a fire in the street at their walled off autonomous zone near the waterfront in downtown Portland. pic.twitter.com/Q6R73c559s

In 2018, a group of Antifa attacked Latino members of the US Marine Corps in Philadelphia. Three Antifa were charged with aggravated assault, conspiracy, terroristic threats, and robbery while inflicting serious bodily injury. Two of […]

For most of the 2000s and 2010s, Portland had very low violent crime rates. This all came apart as the city adopted far-left ideologies that portray dangerous criminals as victims of circumstance. Violent crime exploded in Portland […]

Right now, the media is downplaying America’s surging homicide rates by saying, “it was still much worse in the 90s.” If you search corporate media articles about homicide, you will find this claim over and […]