Disclaimer: As far as we know, Zegarac has not been convicted of any sex crimes, and this article only documents allegations made by people from within Zegarac’s own circles.

David Alexander Zegarac, 42, has been arrested for allegedly using his Jeep Patriot to carry out a terrorist attack on Trucker Convoy demonstrators in Winnipeg, Canada. Four victims were injured.

He is charged with a total of eleven crimes, including four counts of assault with a weapon and numerous charges related to using a car as a weapon, fleeing from the scene, and fleeing from police officers.

Zegarac has been in several pro-Antifa punk rock bands. He has a Youtube channel with thirty subscribers. Many of the videos show Antifa logos and posters. His most well-known band is Brat Attack on Rebel Times records.

However, in 2015, Rebel Times removed all materials featuring Zegarac after multiple women accused him of sexual attacks. One of the accusers alleged she was raped by Zegarac in 2005 when she was only thirteen and he was twenty-seven. The alleged victim says Zegarac got her into politics and playing guitar but was grooming her for sexual abuse the entire time.

Left-wing blogger Jon Kennedy, of Newfoundland, accused Zegarac of grooming victims by organizing all-ages punk rock shows and helping teenagers start bands and record albums. Kennedy alleged that Zegarac had lived in multiple different Canadian provinces and carried out the same tactic in each one.

Following the attack on the truckers, the Antifa-linked Facebook page Winnipeg Punks was in damage control. They made a public statement that concedes Zegarac’s long-time connection to their scene but alleges that no one liked him. They also alleged that they support only peaceful and legal opposition to the trucker convoy movement. 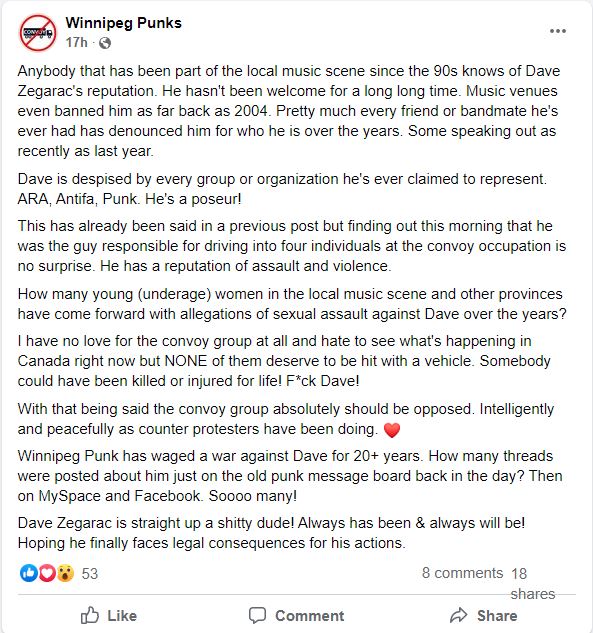 In-righting in the far-left is common, especially among the ones who openly call themselves “Antifa.” These groups usually try very hard to keep in fighting off of social media. They will even use intimidation to […]