Alissar Azar is a high profile participant in the Portland Antifa scene. She is a Syrian immigrant, an OnlyFans “sex worker,” and has been on video participating in multiple Antifa riots.

Azar is currently facing felonious assault charges for allegedly spraying bear mace at multiple victims in June of 2021. She has a trial scheduled for December 13, 2022.

Now Azar is sounding the alarm. She says that Facebook sent copies private messages from far-left activists to the FBI.

This concerns individuals who were part of an Antifa related Facebook group for Willamette Valley. They were all notified that Facebook was cooperating with a request from law enforcement. 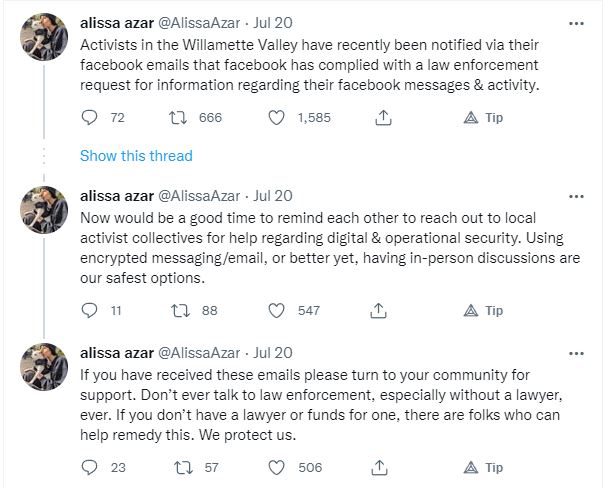 It is important to note that there are rival factions inside of the Antifa movement, and these factions occasionally fight. This fighting can range from online criticism and gossip, to brutal street battles. These battles […]

On June 26th, 2000, Gavaughn Streeter-Hillerich pushed a dumpster up against Portland’s North Police Precinct and then set it on fire. The building already covered the precinct in flammable plywood because BLM and Antifa had […]