A death threat against Black students, written on the wall at a Sacramento High School on March 22nd, was a staged hoax. The perps apparently hoped to incite racial hatred against White students. Police say security footage shows two Black female perpetrators. Their identities are classified because of their age, and they may not face any legal consequences for this felony threat and hate crime. Local prosecutors have not decided if they want to file any charges.

This was the second time a staged hoax like this has been busted in the same school district within two months. On February 11th, racially charged vandalism appeared at a different school in the same district. This prompted a protest and new “anti-racism” training for school staff. However, security footage showed that the perpetrator was a Black female.

Once the perpetrator was exposed, Sacramento City Unified School District “Race and Equity Monitor” Mark T. Harris immediately downplayed the vandalism. He suddenly claimed it was not a hate crime. The local NAACP even defended the perpetrator and suggested that the district was involved in a conspiracy to frame her.

According to local media, there have been even more unsolved incidents of “racist” graffiti at other schools in the same district this year. Statistically, it is safe to assume that most, if not all, are stage hoaxes as well. 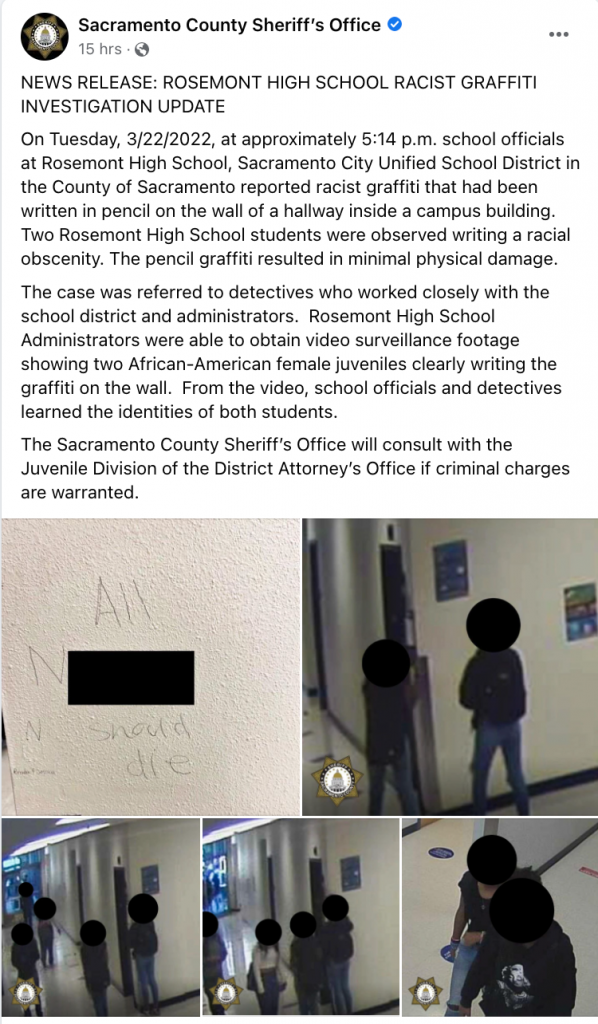 Not only did Antifa violent assault people at a pro-Israel Jewish event in El Cajon, California, but their assaults went very poorly. A video shows outnumbered victims defended themselves quite competently. The criminal Antifa then […]

At approximately 2:00 AM, April 3rd, a mass shooting occurred in Sacramento. Few details are known. Police have revealed that there are sixteen victims, of which six have died. The shooting took place in the […]

Self-described Antifa violently assaulted people who were protesting against pedophilia outside of Wi Spa in Los Angeles. For several years, customers have complained about adult males exposing their genitals in front of female children. The […]