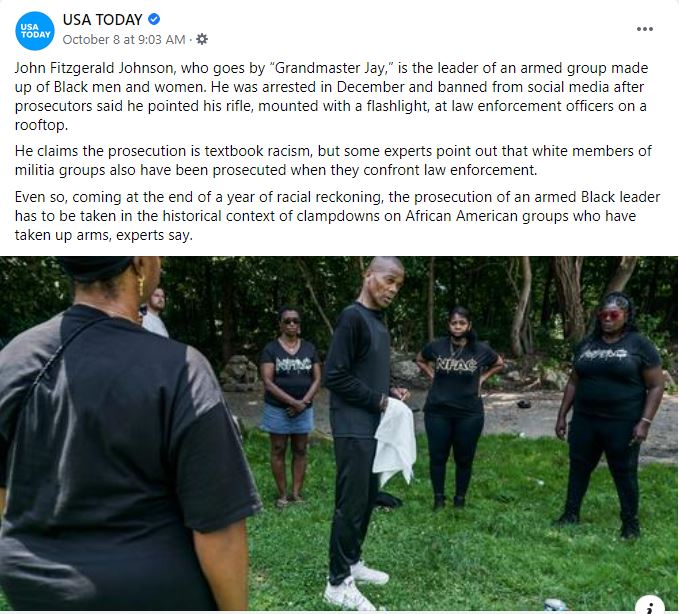 John Fitzgerald Johnson, AKA “Grandmaster Jay,” is the leader of the so-called “Not F*cking Around Coalition” [NFAC]. For the past year and a half, he has been leading armed marches, where he often makes violent threats about murdering White people.

In July of 2020, Johnson held a march in Louisville, Kentucky, where a member of NFAC accidentally fired an AR-15, injuring three other members. The bullet hit the asphalt at point-blank range, ricocheting fragments, and seriously wounded three people. Grandmaster Jay defended the accidental discharge claiming it was caused by a flaw in the weapon’s design.

Grandmaster Jay was later charged with menacing members of law enforcement with a loaded rifle. The alleged victims included federal agents. The agents were stationed on a rooftop and Jay allegedly aimed the rifle directly at them. Jay was arrested by federal agents on September 4th and charged with five felonies.

In June of 2021, an active member of NFAC ambushed and murdered a White police officer in Florida.

The writers at USAToday are advocating that Grandmaster Jay be given special consideration because of the color of his skin. His crime must be placed in “historical context.”

Video: White paramedic saves the day for three members of Johnson’s Black Power militia after they were shot by one of their fellow members:

New St. Louis mayor pledges to shut down one of the city’s two jails, despite the highest homicide rate in the city’s history

Tishaura Jones assumed office as the new Mayor of St. Louis last month. Under the pretense of “racial justice,” she wants to reduce the number of police in the city and shut down one of […]