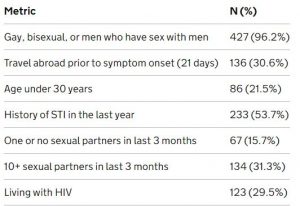 This website has been tracking the spread of Monkeypox in the west since last May.

From the very beginning, multiple European health agencies sounded the alarm that it was primarily homosexual men that were testing positive. Then, an annual Gay Pride dance party in the Canary Islands was identified as the origin of many cases.

Of the 445 confirmed cases in the UK who completed the questionnaires:

96.2% were men who admitted having sex with other men
53.7% had at least one sexually transmitted disease in the past year
29.5% were already living with HIV

In their latest bid to promote musicians based on skin color rather than talent, the English Touring Opera [ETO] is shrinking the size of their orchestra. Fourteen White musicians, who have been with the orchestra […]

David Wolfson is the Justice Minister of England and Wales. He has supported allowing male transsexual inmates in female prisons. Now he is going much further. Female inmates will be required to participate in the […]

According to the UN, the WHO, and the UK Health Security Agency, western cases of Monkeypox are mostly occurring among adult homosexual males. Dr. David Heymann, a former leader of the World Health Organization [WHO], says […]