Within one 90 minute period Friday afternoon, New Orleans has a mass shooting, and two individual shootings.

An adult female was killed near the 1800 block of Painters St at about 12:45 PM. This is a residential neighborhood. Shawn May, an 18-year-old Black male, was arrested and charged with numerous crimes.

A man was shot and wounded near Chartres St and Governor Nicholls St at about 2:00 PM. This is in the Lower French Quarter business district. No other details have been provided.

At 2:14 PM, there was a mass shooting near the 4800 block of Alcee Fortier Blvd. This is a residential neighborhood. At least 45 rounds were fired. One male, 25, died at the scene. Another male of unknown age died at the hospital. Four other males, ages 29, 33, and 57, were hospitalized with gunshot wounds. The police have provided no other details on the victims or any suspects.

Note: During a 72-hour period from Friday evening, April 8th, to the following Monday morning, New Orleans had six dead and twelve wounded in shootings. Local media called this the “Bloodiest Weekend in Ten Years.”

In August of 2005. Hurricane Katrina devastated the city. There was a major exodus of urban Blacks from many of the housing projects in New Orleans. They went to places like Atlanta, St. Louis, and Houstons, causing a decline in violent crime in New Orleans. However, that violent crime has been surging fast since 2019. The homicide rate in 2021 was nearly tied with the 2004 rate.

In 2021, New Orleans experienced the most homicides since Hurricane Katrina, even though it still has a significantly smaller population.

New Orleans had 77 homicides during the first three months of 2022. This means the city is on track to have its highest homicide rate since the 90s. 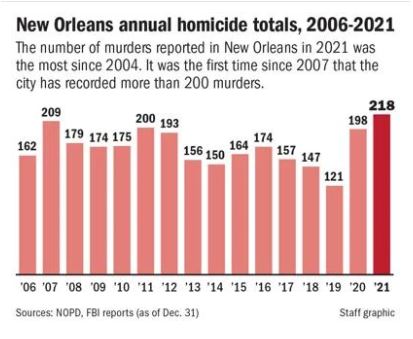 A huge majority, over 90%, all homicides in New Orleans are Black on Black. However, members of other races are also killed by Black perpetrators. Spenser Hudson, a 46 year old White male, killed on March 20th, 2022. He was working as a bartender when a Black male killed him while firing his gun wildly.

Also, in March of 2022, a group of Black males and females, ages 15 to 17, drug Linda Frickey, a 72 year old White female, to her death from a car in a gruesome public killing.

As urban murders soar, Black Americans have increased legal firearm purchases at a rate exceeding all other groups

In 2019, 55.6% of all people arrested for murder were Black, even though Blacks made up about 14% of the US population. In the aftermath of nationwide BLM riots, murder rates soared across the country. The […]

New St. Louis mayor pledges to shut down one of the city’s two jails, despite the highest homicide rate in the city’s history

Tishaura Jones assumed office as the new Mayor of St. Louis last month. Under the pretense of “racial justice,” she wants to reduce the number of police in the city and shut down one of […]