Thor Benson is a contributing author for the far-left Daily Beast and also for Popular Science. He enjoys Twitter’s blue checkmark status.

Yesterday he bragged on Twitter about harassing an Asian man in a bar. He said he placed his hand on the man’s shoulder and called him a “garbage person.” Benson went on to boast that the man got nervous and left the bar. This action was cheered by scores of Benson’s Twitter followers. However, some of his followers complained he did not physically attack this random man.

Benson mistakenly believed that the man was Andy Ngo, the author of a book that exposes Antifa. Ngo was not even in the United States at the time.

So far, Daily Beast and Popular Science have not responded to request for a comment on the incident.

I just ran into Andy Ngo at a bar in New Orleans. I politely told him he’s a “garbage person.” Lol 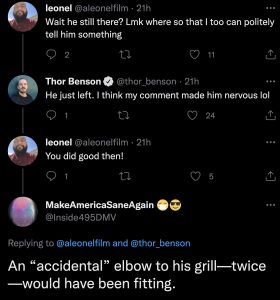 Seattle Antifa rioted last night, February 17th, to show support for an unnamed man that committed “suicide by cop.” The man called 911 and then when police arrived, he ran towards them with a knife screaming for […]