The new $1 billion weapons package to Ukraine, declared unilaterally by the Biden administration without congressional approval, doesn’t seem to be paying for much.

A huge chunk of the $1 Billion price is supposed to be for two harpoon launch vehicles with missiles. Which the Biden administration concedes that it will take MONTHS to even come up with two of these to send. By the time Ukraine even gets them, the whole war could be over.

In 2020, Taiwan reportedly agreed to pay $2.4 Billion for 100 Harpoon systems. This included one hundred launch vehicles, which hold four tubes each, and 400 missiles. Plus a few practice missiles. Taiwan was supposed to begin receiving delivery of these weapons in 2024, but that has already been delayed to 2025. This is only $24 million for each launcher and one set of four missiles.

From what I understand, the launch tubes are reloadable, but you need a crane for the 1,500 pound (691 kilogram) missiles. I assume that Taiwan believes once a launcher is fired, it will not survive long enough to be driven away and reloaded somewhere. They are only giving the launchers a max lifespan of one salvo.

Taiwan is also looking at delays of up to three years for delivery of the M777 155mm artillery they already purchased. This is because so many have been sent to Ukraine. 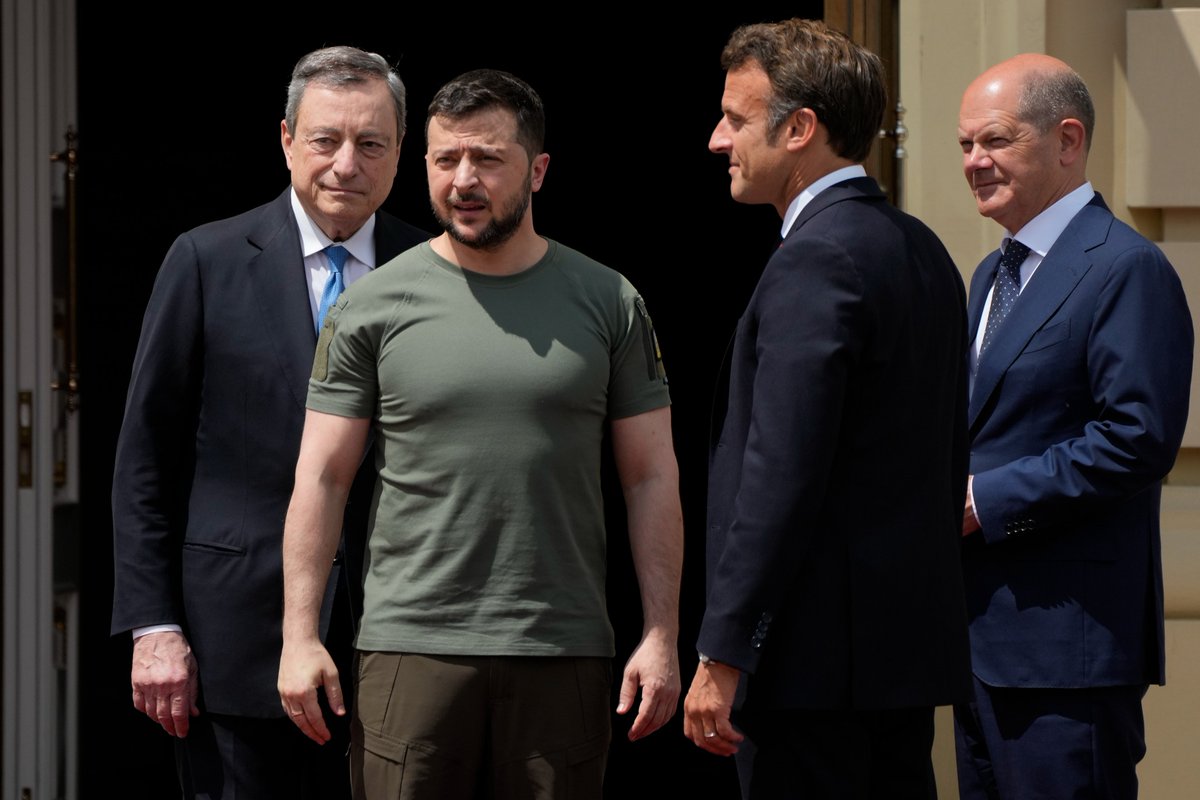 Scholz, Macron, and Draghi met with Zelensky in Irpin and then had a sit-down meeting in Kiev. Zelensky told them he wanted more and better weapons, fast-track EU membership, and billions to rebuild Ukraine.

Zelensky denounced Scholz before the media saying he was “effectively doing nothing” and “trying to appease Russia.” He claimed Scholz has still not picked a side.

Ukrainian media denounced Scholz as all talk and no weapons, while also denouncing Macron for dealing with Putin “behind Ukraine’s back.”

Draghi apparently spoke to Zelensky about removing the naval mines at Odesa. He then told the media that the port could be demined in two weeks and grain could be flowing from Odesa by the end of August. However, it appears that Ukraine is still refusing to agree give up their naval mines.

Former Russian President Medvedev mocked the event saying, “European fans of frogs, liverwurst and spaghetti love visiting Kiev. With zero use. Promised EU membership and old howitzers to Ukraine, lushed up on gorilka (alcoholic beverage) and went home by train, like 100 years ago. All is well. Yet, it won’t bring Ukraine closer to peace. The clock’s ticking.”

From Renaissance Horizon Ukrainian President Zolodymyr Zelensky announced a ban on “any activity” by eleven political parties. He also nationalized all remaining Ukrainian television news outlets. Zelensky says there will now only be one “United […]

Pew Research: Over one third of all Americans say nuclear war is worth it to help Ukraine

Pew Research conducted this polling from March 7 to March 13th. They found that 36% of Republicans and 35% of Democrats responded that they either somewhat favor or strongly favor risking nuclear war to help […]