Jade Guanaro is an American male transsexual who has a history of nude public appearances and displaying images of his genitals in public. He calls this “revolutionary art.”

Guanaro recently delivered a lecture naked at Northwestern University. Most likely at great cost to the University. He has made a lucrative career out of exhibitionism and a possible autosexuality disorder.

Now a full-sized sculpture of his naked body has been put on public display in the Swiss city of Basel. The sculpture was based on a full-sized 3D scan and 3D printout of himself. This is being sponsored by the notorious Art Basel, which promotes so-called “modern art.”

The statue is located at the intersection of Freie Strasse, Bäumleingasse, and the appropriately named BARFüssergasse. The statue is falsely labeled “WOMAN” on the pedestal.

This is a trendy retail district. The statue is surrounded by high-end clothing stores and a Starbucks coffee shop. 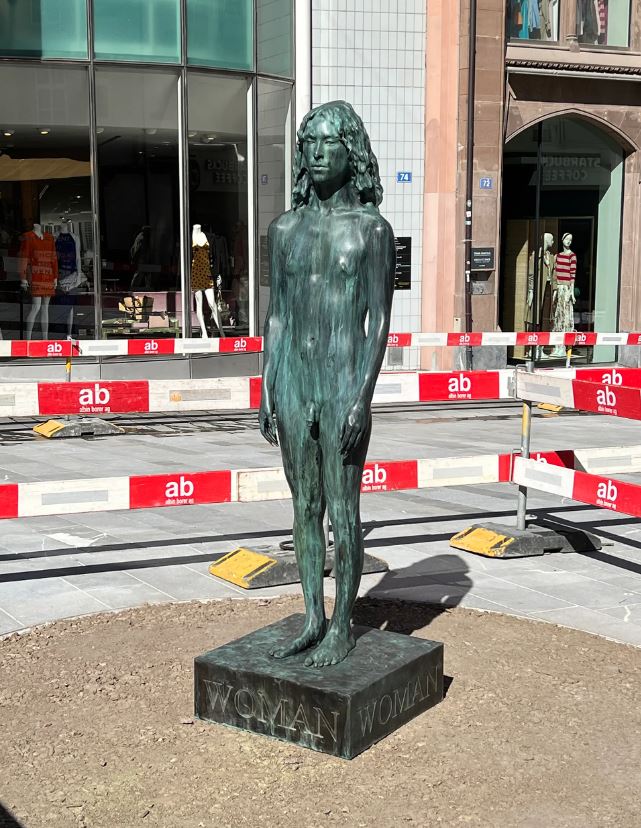 David Wolfson is the Justice Minister of England and Wales. He has supported allowing male transsexual inmates in female prisons. Now he is going much further. Female inmates will be required to participate in the […]

Obama appointed Judge Jane Magnus-Stinson has granted an injunction against an Indianapolis, Indiana public school. The school must indulge the fantasy of a male transsexual student who wants to pretend he is female. The school […]

A transsexual activist, “Sophia” Westfall fell for a sex predator sting operation conducted by Predator Poachers in Berkeley, California. Westfall lives nearby in Oakland and refers to himself on Twitter as “a lesbian.” Activists have released chat […]