Several years ago, Youtube began test deleting conservative Youtube channels with small subscriber counts. They would also delete larger, more well-known channels, then re-instate them the next day and say it was a mistake. Eventually, weeks, months, or even a year later, they would delete the same channel permanently. While Youtube will not admit it, critics say they were testing the public’s reaction and conditioning users to see large-scale censorship on the platform as an inevitability. Youtube slowly deleted larger and larger channels. Since not enough people would publicly defend these channels, Youtube eventually felt emboldened enough to delete channels with a million subscribers.

Yesterday, Bloomberg ran a fake headline claiming a Russian invasion of Ukraine had begun. This falsehood continued for over thirty minutes. Bloomberg then published a statement claiming it was an accident.

Why wasn’t the fake headline deleted thirty seconds later if it was an accident? Why did it take so long? Another explanation is that Bloomberg did this to condition the public to believe that a Russian invasion of Ukraine is an inevitability. They may also be testing how much the public actually knows about the situation and how easy or hard it will be to mislead people.

For the latest information on the war in Donbas and the Ukraine/Russia border situation, we suggest the website LiveUAmaps. 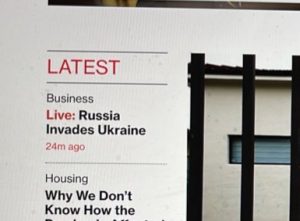 Major media outlets state that Poland is preparing its 28 Mig-29s to fly to Rammstein Air Force Base. This is a US base inside Germany. The US would somehow send them into Ukraine. Some American […]

Marjorie Taylor Greene is one of the 57 Congressmen who voted against the new $40 Billion aid package to Ukraine. Click here to see our full list. US Senator Lindsey Graham already says that a […]

Save Ukraine – Negotiate a peace where both sides can declare victory

The most pragmatic approach to peace negotiations would be to create terms in which both sides can declare victory and neither side is humiliated.