Lowell School charges $38.5k for kindergarteners, which increases to $42.5k for middle schoolers. However, they offer “financial aid” for students that will increase the “diversity” of the student body. Their Twitter account primarily tweets about BLM and left-wing causes rather than academics. The school’s website boasts that “Social Justice” is a primary subject matter. 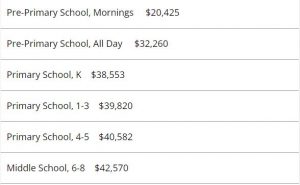 A school in DC forced kindergarteners to march around with BLM signs and chant “Black Lives Matter” pic.twitter.com/wGiuBY13Yg

For decades, there have been tensions between the Black community and the immigrants who own small inner-city businesses. Occasionally, this will flare up somewhere and make the news. However, we have never seen anything like […]

Biden now says America needs more police officers on the street, not less, and the White House is said to have abandoned plans to place a so-called “reconciliation package” into the infrastructure bill.

Cori Bush tells fake story about being shot at, repeatedly, by “White Supremacists”