Van Erick Custodio, 42, worked at Belmont Abbey College and was teaching one class as an adjutant professor at UNC Charlotte. He has been charged with first degree murder for killing six week old Lucas Bircham. The baby was found dead with a fractured skull, broken rib, and two broken legs on April 1st. The baby died in the hospital on April 14th.

Custodio was initially given a $500k bond. The bond was revoked after the baby died and his charges were upgraded.

Custodio adopted Bircham from the Seven Homes Adoption and Foster Care Agency. The agency claims all foster parents go through a four to six month screening process. A non-profit group called “Both Hands” provided Custodio with money for the adoption. The group now says “we are devastated.” Custodio and his wife also raised money on a now deleted GoFundMe campaign.

UNC Charlotte issued a statement saying he was placed on administrative leave.

Custodio also has an adopted daughter.

Custodio posted this video on Youtube in April 2021 to ask the public for money to finance the adoption of Bircham. 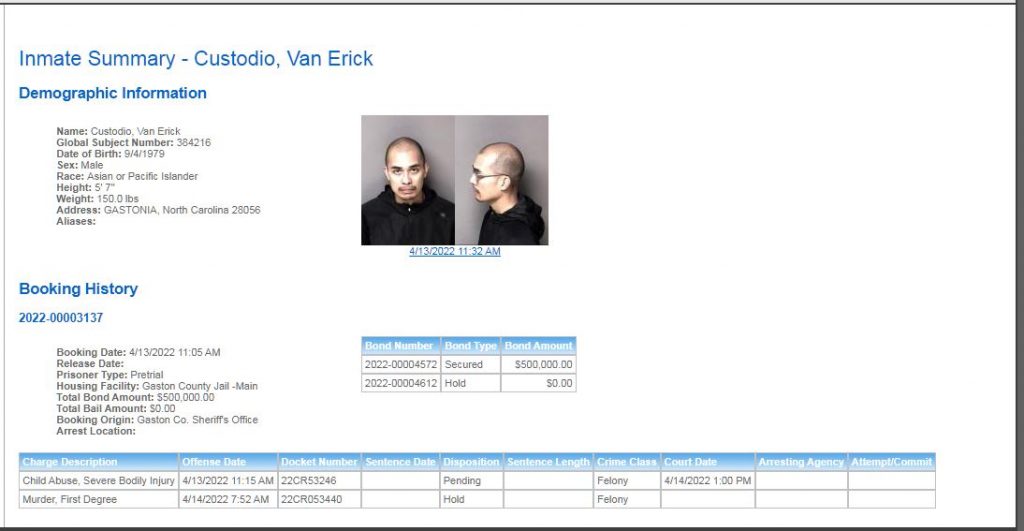 Researchers at the University of Minnesota Twin Cities looked at adults raised by foster parents to see if their IQ is more comparable to their biological mothers or their foster parents. The research involved 486 […]

This story highlights the biggest problem with juvenile justice law. A 17 year old has been accused of killing two people and dumping their bodies along a gravel road in Orange County, NC. He is […]