The Globe and Mail, one of Canada’s most prominent media outlets, is sending shockwaves across North America with an opinion piece claiming freedom is an ideology used to “diminish democracy” in the US and Canada. Gary Mason, Globe and Mail “National Affairs Columnist,” wrote the piece.

The piece reminds us just how extreme, divisive, out of touch, and utterly caustic that so-called “mainstream” media can be.

According to the Globe and Mail…

1. Freedom is an “ideology” that can be “weaponized” to achieve political goals.
2. Freedom was a positive weapon when it was used to end slavery. Now it is a weapon to espouse selfishness and uphold property rights.
3. In the US & Canada, this ideology is primarily used by the “far-right,” the “alt-right,” and “White-identity” activists.
4. Freedom poses a direct threat to democracy.
5. The pro-Trump wing of the Republican party [MAGA], is the primary example of Freedom being used to threaten democracy.
6. Some members of the Canadian Conservative party are adopting the ideology of freedom from MAGA.

Freedom is a word that gets bandied about a lot these days, but has mostly been co-opted by the alt-right, both here and in the U.S. During the last federal election, People’s Party of Canada leader Maxime Bernier, the far-right’s current standard-bearer in this country, was greeted with chants of “freedom, freedom,” at his campaign stops.

Freedom, as an ideology, has been appropriated by the Make America Great Again (MAGA) wing of the U.S. Republican party. There is a strong MAGA fan base in this country, apparently with prominent supporters such as Candice Bergen, the new interim leader of the federal Conservative Party of Canada. Undated photos circulating on social media appear to show Ms. Bergen sporting a camouflage MAGA hat.

MAGA hats and Trump signs have been ubiquitous at the Freedom Convoy occupation in Ottawa, which has attracted donations and political support from the U.S. One man rode a horse through the downtown streets carrying a flag emblazoned with the word “Trump.” The word ‘freedom’ could be found on most signs being touted by the protesters. For many, it’s a word that has become code for white-identity politics and the far-right’s weapon of choice in the culture wars. 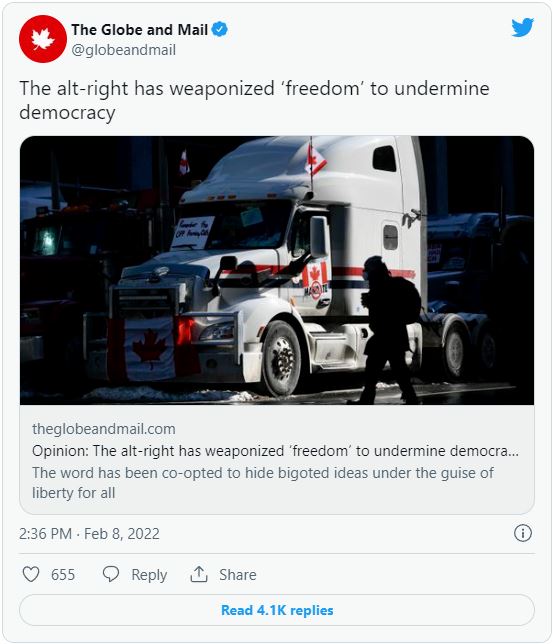 Justin Trudeau has invoked the Emergencies Act. Trudeau says the government will mobilize more law enforcement resources to arrest members of the truck convoy and tow their trucks away. People deemed to be involved in illegal […]