Ukraine’s forensic investigators say “dozens” of people in the Bucha/Irpin area were killed by artillery shells loaded with fléchettes.

Fléchettes are most commonly associated with WWI. They rarely appear in modern warfare, and using fléchettes in residential areas can constitute a war crime.

Vladyslav Pirovskyi, a Ukrainian forensic doctor, told The Guardian, “We found several really thin, nail-like objects in the bodies of men and women, and so did others of my colleagues in the region. It is very hard to find those in the body, they are too thin. The majority of these bodies come from the Bucha-Irpin region.”

The fléchettes are believed to have been loaded into 122mm ZSh1 artillery shells that fit D-30 howitzers. Both sides use D-30 howitzers. However, according to The Washington Post, fléchette loaded ammunition was hitting the city on either March 25 or 26. Bucha resident Svitlana Chmut collected a bunch that hit her car and spread across her yard. She says a fléchette loaded shell exploded in the air above her property while Russian soldiers were near her home.

Before Russia evacuated on March 30th, the city was under heavy bombardment by Ukrainian artillery for days. You can see the impact craters all over the city.

In 2014, the Ukrainian army was accused of using fléchette loaded artillery against separatist militia in Luhansk Oblast. There is no documentation of Russia using fléchettes.

The saga in Bucha begins on February 27th, when Russian troops entered the city. According to Ukrainian media, the Russian army brought evacuation buses with them for civilians. However, Ukrainian Defense Minister Oleksiy Danilov publicly urged the residents of Bucha not to get on Russia’s buses. On the same day, Ukrainian media announced that the Ukrainian army blew up the main bridge linking Bucha to Irpin. This left a lot of civilians trapped.

The Russian army left Bucha on March 30th. On April 1st, a video was uploaded to social media by Ukrainian fighters calling themselves “Bossman Boys in Bucha.” In the video, a man says, “There are guys without blue armbands. Can I shoot at them?” Another voice says, “Sure, f@ck!”

On April 2nd, the Ukrainian National Guard published a relatively upbeat eight-minute video of their operation in Bucha. They are clearing the streets of roadblocks, interacting with civilians, and removing unexploded artillery shells. There is even a scene showing aerial drone video of some city streets. A civilian states that the Russian army detained him over his Ukrainian flags. He says he thought he would be murdered, but instead, they released him after a brief conversation.

On April 3rd, Kiev published a much different one-minute video that appears to show dead male civilians scattered all over a main road. Some of the victims are wearing white armbands, indicating that they may have been delivering food and other humanitarian aid to residents for the Russian army. Radicals in Ukraine have previously threatened to murder these people as collaborators.

Notes: The Washington Post and The Guardian have no way to prove which side fired the fléchettes, but the circumstantial evidence they have presented strongly points towards Ukraine, not Russia. No matter what you think about Russia or Ukraine, this type of gaslighting by the corporate media is despicable and needs to be called out.

Using fléchette in a residential area is general viewed as a war crime. However, Zelensky’s most prominent military adviser has stated that international humanitarian law and the rules of war do not apply to the Ukrainian side.

Below: Fléchette loaded artillery shells were allegedly discovered when separatist militia overran a Ukrainian army position in Luhansk Oblast in 2014 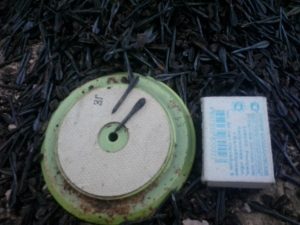 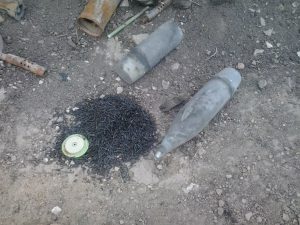 NATO Secretary-General Jens Stoltenberg was at the June 12th Kultaranta Talks in Finland. He spoke with Finnish president Sauli Niinisto about the Russo-Ukrainian War. While neither outright endorsed the ceding of territory to Russia, they […]