This is a real tweet from the Associated Press. We thought it was a hoax. It is not. Here is a permanent record on archive.

Also the tweet itself contains textbook “misinformation.” The court never found Alex Jones was never ordered to pay damages for saying the “shooting was staged.” He was ordered to pay damages for allegedly refusing to cooperate with discovery. The discovery requests he allegedly refused to cooperate with did not even pertain to the Sandy Hook massacre. They pertained to his own personal finances.

The Associated Press blatantly provides false information in this tweet while calling for the erosion of the first amendment.

The AP appears to be in direct opposition of freedom of speech. 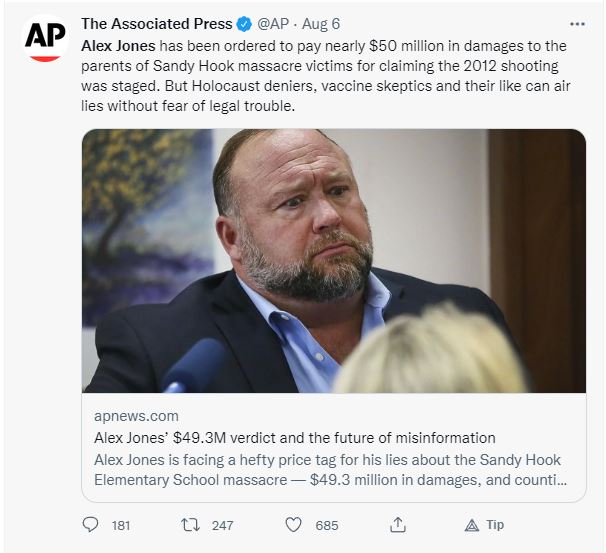 Alex Jones has been ordered to pay nearly $50 million in damages to the parents of Sandy Hook massacre victims for claiming the 2012 shooting was staged. But Holocaust deniers, vaccine skeptics and their like can air lies without fear of legal trouble. https://t.co/r4gq16GSk4

2021 White Coat Summit: Anniversary of the 2020 viral media event that Big Tech tried to shut down

Between 65-70% of all Israeli citizens are fully vaccinated with the mRNA Pfizer vaccine. Despite this, the number of people hospitalized for the virus is at the highest level since late February. The number of […]