On January 9, 2021, self-described members of Antifa attacked a gathering of Trump supporters with tear gas, tasers, and clubs. Eleven Antifa were arrested.

Erich Louis “Nikki” Yach, 38, was photographed spaying an injured man with tear gas. He was charged with assaulting people with mace and a taser and kicking people while they were already on the ground. A grand jury indicted him on a total of twenty-nine charges, including eight felonies.

Yach, who is a transsexual (trantifa) with a prior felony conviction, accepted a deal and pleaded guilty to three felonies.

He pleaded guilty to felony conspiracy to riot, felony assault with tear gas, and felony assault causing bodily harm. He also admitted to committing two “aggravating factors.” Namely, that he committed felonies while he was out on bail for a felony charge. Yach also had to affirm that multiple other defendants were his co-conspirators. It is unclear if he will be required to testify against them. Further, Yach had to plead guilty to one of his prior charges.

Yach was sentenced to fifty-six months, with credit for time already served in jail. When Yach was arrested, he had multiple open cases and failed to appear at multiple court dates. Before participating in the Antifa riot, he had been in Mexico. So he was deemed a major flight risk.

Had Yach not accepted the deal, he would have faced up to 16 years for committing new felonies while out on bail for a felony.

During sentencing, Maria “Gigi” Hubbard spoke on his behalf. She claimed to be his “husband” and denounced the court for “political and fascist nonsense.” She also demanded that the 6’4″ Yach be transferred to a female prison.

Ten other Antifa, facing charges from the same riot, plead not guilty. Their trials will begin in March 2023. At least one of the other suspects is a trannssexual as well. 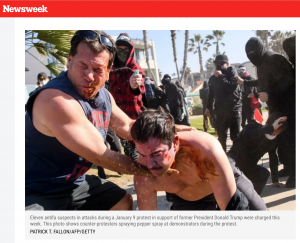 John Sullivan, AKA “Activist John” AKA “Jayden X,” the far-left activist charged by the FBI, was part of a secret Discord-based chat group. Screen captures from the Discord group have been leaked, showing clear evidence […]

Antifa staged a violent riot in front of the home of Frederick, Maryland Alderman Kelly Russel. They screamed profanities, blocked the street, assaulted and threatened pedestrians, and burned a flag that they had taken from […]