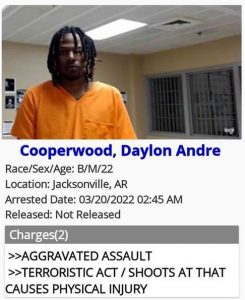 Update: Police now say there were 28 shot, including at least five children. However, only one person died. There were two shooters.

HoodNic is an annual Community Festival/Car Show in Dumas, AR, which organizers claim is dedicated to promoting “non-violence.” Yesterday, there was a mass shooting during the 16th Annual HoodNic. The number of gunshot victims has steadily risen. The total count right now is two dead and twenty-three wounded. At least two of the victims are children.

Posts on social media allege that Daylon Copperwood was arrested Sunday morning. The local police have not confirmed this. The identity of the fatalities has not been released.

Dumas is a majority Black town of fewer than 5,000 people in southeastern Arkansas. This is another reminder that the surge of Black on Black mass shootings is not just occurring in dense urban areas like Chicago, Baltimore, and Philadelphia. They are also happening in rural areas of states like South Carolina, Mississippi, and Arkansas.

These are the worst mass shootings of 2021, as of March 31st. To see our continuously updated list, click here. A mass shooting is most commonly defined as four or more victims. We rank shootings […]