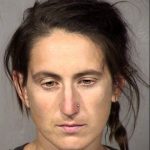 Nicole Barbara Armbruster, 37, is a self-described Antifa member whose violent serial rioting has gotten her arrested all over America. She currently faces charges in multiple ongoing cases.

Reuters romanticizes her violence in much the same way that the Southern Poverty Law Center and other far-left non-profits have for the past two decades. The media outlet boasts of her alleged martial arts and emergency medical training. They talk about her engaging in physical assaults on “Nazis,” as if all of her victims were literal Nazis. For example, she was arrested in June of 2020 for assaulting Jack Posobiec in Washington DC. Posobiec is a mainline center-right figure.

Armbruster has been arrested in Washington, DC, Arizona, Virginia, Minnesota, and Florida. Her first arrest for left-wing “activism” was in 2003. Her most recent known arrest was on December 12th, 2020, after allegedly assaulting people with Bear Spray in Washington DC.

AntifaWatch has a bunch of information on some of her past charges, including felony rioting, destruction of property over $1,000, and much more.

Reuters gloats that most of her charges, over the years, have been dismissed. Something common with all Antifa because they primarily only committee violence in places where the local authorities protect them from any real consequences.

Like most Antifa, Armbruster has no background as part of the working class. She grew up in a wealthy family in New York and attended a high-dollar private college. Reuters makes no mention of any actual job she has ever held. They state that she used to be a volunteer Girl Scout leader in Washington DC.

Armbruster currently lives in an old ratty camper in a remote part of Arizona with no running water, sewage, electricity, or roads. Last year, she bought the secluded property and shares it with a 70-year-old male Antifa friend who has a small RV. Their only electricity comes from solar panels. Land like this can be purchased for almost nothing in Arizona.

While left-wing non-profit groups routinely provide Antifa with transportation and legal expense, they certainly are not using their millions to help Antifa members with living expenses. Many hardcore Antifa live like squatters.

The purpose of the Reuters article is to attempt to make Antifa look cool. As well as advance the wildly false narrative that Antifa is only assaulting literal Nazis, which is as far from the truth as can be.

However, most American women do not want to be 37 years old, unmarried, childless, jobless, and hauling in their water just to go to the bathroom.

BLM/Antifa trying to establish a second autonomous zone in Minneapolis

East 38th Street and Chicago Avenue have been a 24/7 BLM “autonomous” protest zone for nearly a year now. It is called the “George Floyd Autonomous Zone,” as well as the “Free State of George […]