District of Columbia Public Schools [DCPS] is 58% Black and 15% White. DCPS is among America’s most lavishly funded public school systems, yet it is also one of the worst-performing.

DCPS has 82 elementary schools. Janney Elementary School is ranked as the second-best performing of these by Great Schools. However, the school’s demographic makeup is far from average for the district. It is 72% White and 5% Black.

In fact, according to Great Schools, Janney is the single Whitest public elementary school in DCPS.

It has been revealed that, earlier in this school year, Janney Elementary forced all 4 to 9-year-old students to attend an “initiation” for the “Anti-Racism Fight Club [ARFC].” The ARFC is trademarked by professional “anti-racist” activist Doyin Richards. For a fee, Richards can be hired to conduct a workshop for elementary-aged students. Richards says he has “created 36,413 new anti-racists” through his workshops for children and adults.

Each student was given a small workbook titled “Anti-Racism Fight Club Factbook For Kids.” It contains questions they were supposed to answer about how they would confront other children and adult relatives over “racist” comments. The book teaches students to adopt Antifa style tactics stating, “being loud, uncomfortable, confrontational and visible to ensure change is made.” It used phrases like “throat punching,” curb-stomping,” and “choking out.”

The book introduces impressionable children to anti-White conspiracy theories, stating, “white people walk around with an invisible force field because they hold all of the power in America.”

The goal seems to target impressionable young White children for indoctrination to be future members of Antifa.

The initiation into the Anti-Racism Fight Club only came to light because some parents complained about it on an anonymous public forum called DC Urban Moms and Dads.

A spokesman for DCPS says that the initiation workshop is not part of any DCPS curriculum.

The entire “Fistbook” can be viewed online as a PDF. 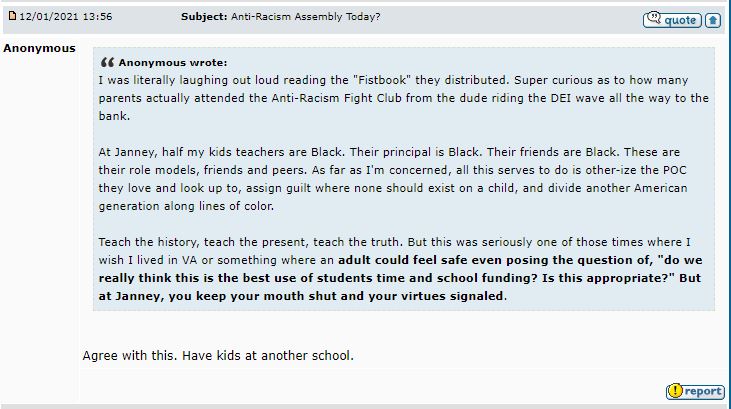 Wednesday night, a notorious boarded-up property known as “Red House” hosted a wild and violent party for Antifa. The property has been involved in left-wing violence in the past. At least twenty people called 911. […]