Three Black females from Texas were videotaped assaulting people at Carmine’s Restaurant in New York. They launched the attack because the restaurant said they were unable to seat two other Black males because of the vaccine passport mandate made by New York Mayor Bill de Blasio.

Sally Rechelle Lewis, 49, Kaeita Nkeenge Rankin, 44, and Tyonnie Keshay Rankin, 21 were all arrested. Police say they repeatedly punched a female hostess and broke her necklace. The victim suffered bruises and scratches. Salley is from Houston, the other two are from Humble, Texas. Tyonnie is Kaeita’s neice.

The three suspects had entered the restaurant with vaccination cards. However, two Black males tried to join them who did not have vaccination cards. When they explained the new mandate by Mayor Bill de Blasio, the attack started.

The three suspects immediately had a lawyer from Texas contact the New York media with an elaborate tale of racial persecution. A tale which no one witnessed and contracts all evidence. According to their lawyer, a multi-racial group of hostesses, one of whom is Black, targeted them for being Black and called them the “n-word.”

Protesters take over the streets, returning to Carmines to Confront the restaurant pic.twitter.com/O43gZAQIfk

An altercation occured with an older white male and he attempted to hide inside the restaurant. #HappeningNow pic.twitter.com/UboZZuCqrI

Surveillance video of last week’s assault on an Asian hostess at @CarminesNYC by three black women has been released. The restaurant says its hostess was attacked over a dispute about showing vaccination proof per city mandate. The women & BLM say they were racially profiled. pic.twitter.com/gU6Cx6EPQC

Last week’s violence against our staff had nothing to do with race, despite a Texas criminal defense lawyer’s false assertions to the contrary. Three of our hosts who are respectively Black, Latinx, and Asian American women did their best to welcome a large party while enforcing New York’s vaccination requirement for indoor dining. We require that every guest show evidence of vaccination to eat inside. Unfortunately, some male members of the party were unable to provide vaccination proof and so could not enter the restaurant. Three female guests in the party who had shown proof of vaccination and been welcomed into the restaurant without issue then launched an entirely unprovoked, brutal attack on our hosts, one of whom continues to suffer from a concussion.

None of the attackers offered any reason for their attack. None of the hosts – all of whom are people of color – uttered a racial slur. None of the attackers mentioned anything about race to our managers, staff, or the police who arrested them, and the Texas criminal defense lawyer’s false assertion otherwise is a deeply cynical ploy to try to excuse wanton violence.

We are focused on keeping our employees safe as they continue to enforce New York’s vaccine mandates, and we encourage everyone to get vaccinated. We are also very grateful for all of the support from our community and the City, which has been incredibly touching for our staff. 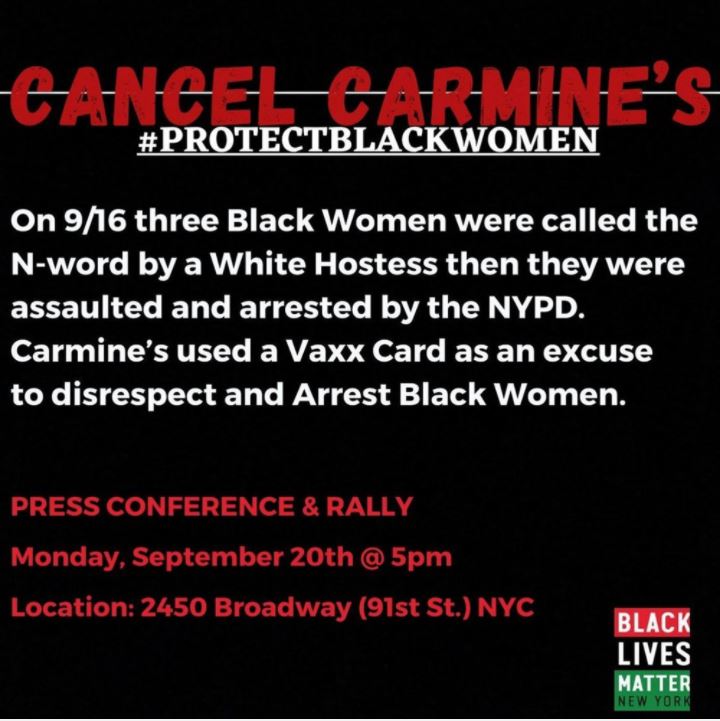 BLM Inc.*, the non-profit that owns the Black Lives Matter website, recently boasted that they collected $90 million in donations in 2020. The father of Michael Brown, Michael Brown Sr., and the Ferguson-based International Black Freedom […]

A group of thugs were captured on surveillance camera beating a cab driver to death. The victim is Kutin Gyimah, a 52 year old immigrant from Ghana. Gyimah leaves behind four children, aged 3-8. Two […]

A 61-year-old Latino man was brutally murdered on the sidewalk in Brooklyn by two young Black males. The killing was captured on surveillance videos from two different angles. The two thugs wore medical masks during […]