Quintez Brown is a high-profile BLM activist who was once featured by the Obama Foundation and was a guest on MSNBC’s Joy Reid Show in 2018. He is a former columnist for the Louisville Courier-Journal. He is running for Louisville City Council and has received favorable press for his candidacy from local media.

Craig Greenberg is a Jewish lawyer running for mayor of Louisville on a far-left platform that panders to BLM.

The authorities say Brown stormed Greenberg’s campaign office and fired four rounds at him from a 9mm GLOCK handgun. One of the rounds is said to have torn the sweater Greenberg was wearing, but he was not hit. Prosecutors charged Brown with one count of attempted murder and four counts of wanton endangerment. He received a $100k bail.

Yesterday afternoon, BLM Louisville posted his bond using a cashier’s check. Around 8:00 PM, Brown walked out of jail flanked by family members and other local BLM activists. A male can be heard saying “no comment” over and over while a woman sings “O Happy Day.” He was outfitted with an ankle bracelet before being released.

BLM leaders claim that Brown is not a criminal but a man suffering from a mental health crisis.

Local media states that “The Louisville Community Bail Fund [LCBF]” posted the bond. The LCBF website describes itself as “a project of BLM Louisville.” The Alliance For Global Justice, a far-left/Marxist non-profit based in Tucson, processes credit card donations for LCBF.

It has also been discovered that Brown met with a leader of a group called “Lion of Judah Armed Forces” just days before the alleged attempted assassination. Lion of Judah is a paramilitary group within the “Black Hebrew Israelite” movement. This movement generally espouses anti-White hatred and considers “White Jews” to be usurpers that stole the true identity of the Black race. The Black Hebrew Israelite movement is blamed for dozens of murders and attempted murders spanning several decades.

Local media seem to have thrown Greenberg under the bus and are aggressively pandering to BLM and calling Brown a “civil rights activist.” Media are treating Greenberg as a random victim, who was not specifically targeted. Breon Martin, a Black reporter for FOX/CW affiliate WDRB News, used his own personal twitter account to advance BLM’s narrative that Brown is just a victim of mental health issues.

Greenberg responded to Brown’s release stating “Our criminal justice system is clearly broken. It is nearly impossible to believe that someone can attempt murder on Monday and walk out of jail on Wednesday. Sadly, like others who suffer from a broken system, my team and family have been traumatized again by this news.”

The $100,000 cashiers check has been officially given to the clerks office to pay for @BLMLouisville activist Quintez Brown’s release. @LouCommBailFund is paying. Brown is accused of shooting at Louisville mayoral candidate @RunWithCraig. pic.twitter.com/5BMdW2hpfm

Loved ones surround Brown leaving the Hall of Justice: pic.twitter.com/C1hL9ujy7s 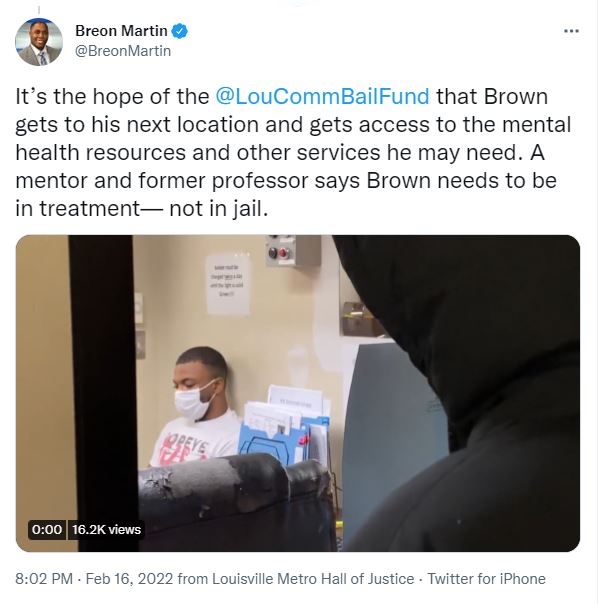 Khalil Coleman, 36, a Black Lives Matter [BLM] leader in Milwaukee, has been convicted of felony first-degree robbery in Kentucky. He faces up to twenty years. According to Elsmere Police Chief Joe Maier, Coleman and […]

BLM rioter who shot and wounded two Louisville police officers sentenced to as little as 11.5 years

On September 23rd, 2020, Larynzo Johnson shot two police officers during a BLM event in Louisville, KY. One officer was hit in the leg and one in the abdomen. As the result of a plea […]