On August 14, 2020, Phillip J. Wenzel was part of a violent Antifa riot in Portland, Oregon. He was arrested and charged with one felony and three misdemeanors. Police say he attacked an officer who was trying to arrest another suspect. According to local media, Wenzel was wearing a Kevlar vest, helmet, and gas mask.

Radical “progressive” Multnomah County District Attorney Mike Schmidt dropped all his local charges. Schmidt has refused to prosecute over 90% of all charges brought against Antifa and BLM rioters in Portland.

A federal grand jury indicted Wenzel on the charge of felony civil disorder, a federal charge. Civil disorder is used when someone interferes with a police officer who is trying to make an arrest. It carries a five-year sentence. On September 29, 2020, he was arrested by US Marshalls.

However, acting US Attorney Scott Erik Asphaug has come to his rescue. Rather than hold Wenzel accountable for his actions, Asphaug asked the judge to dismiss all the charges since Wenzel completed four days of community service.

Apparently, four days of community service is enough to evade years in federal prison. Wenzel is a Portland-area paralegal. 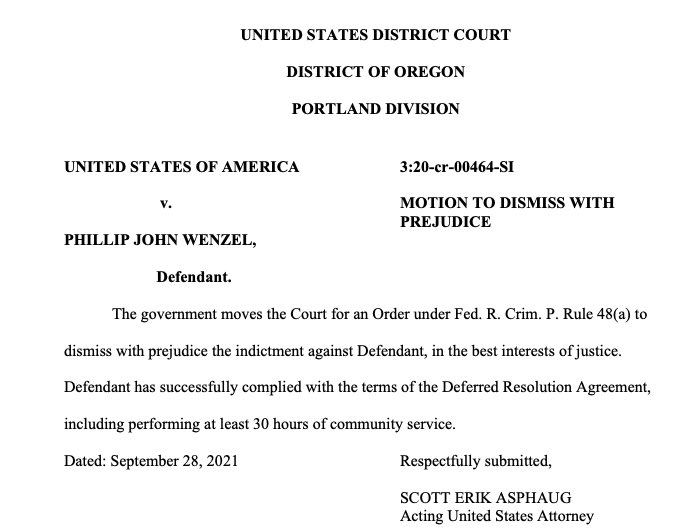 Club wielding mob of adult Antifa surrounds high school in Thessaloniki, Greece, only to get beaten in the streets by the students

A giant mob of club-wielding Antifa surrounded EPAL Stavroupolis, a High School in Thessaloniki, Greece, to denounce the student body as “racist.” Video shows the mob trying to force students back into a fenced-in area and […]

Jarrod “Sofie” DeFerrari is a high-profile member of Antifa in Portland. He posts pictures of himself on social media and participates in Antifa violence. Last January, DeFarrari was indicted by a grand jury for an […]

For the 3rd time in 20 months, a violent leftist in Portland has become the victim of a grisly homicide

In only twenty months, three of Portland’s left-wing activists, who were known to have engaged in criminal violence, died in gruesome homicides. Two were stabbed to death, and one was crushed to death. These deaths […]