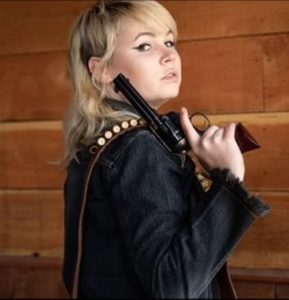 You could not make up a crazier story than this.

A week ago, Alec Baldwin’s stunt double accidentally fired two live rounds at a movie set. Then, five days later, a group of workers staged a walk-out to protest “unsafe working conditions.” Despite the walkout, the remaining crew continued production. That’s when Alec Baldwin accidentally fired a live round at the same set. This round hit two people, killing cinematographer Halyna Hutchins.

Hannah Gutierrez-Reed is the daughter of Thell Reed, a famous Hollywood armorer. He has worked on dozens of Hollywood movies for over three decades. This was her second movie. She previously worked as the the armorer for The Old Way, a Western starring Nicolas Cage. That movie is scheduled to be released in 2022.

This is a recent video that Gutierrez-Reed posted of herself on Tik Tok.

This was the person in charge of firearms on Baldwin’s production, no joke. @JUSTcatmeme2 pic.twitter.com/CcNbgGGmGC

Battle at Lake Changjin is one of the most successful movies in Chinese film history. It was made by a military owned film company at an estimated cost of $200 million. The film is on […]