After nearly two years, Google has re-added the Paler Social Media app with a “Mature 17+” tag. Apple re-instated the app about sixteen months ago.

At one time, the social media site was a sensation despite all its internal problems with software bugs. However, it has been in a steep decline. For most of 2020, the site was habitually non-functional. Then it continued to function poorly for much of 2021.

SimilarWeb currently ranks Parler as the 14,770th most popular website in America. At one time, it was in the top 200.

Between Parler, Gttr, Truth, and Gab, Parler now has the smallest audience by far.

Gettr and Truth came after Parler and compete for the same users. However, Gettr has been described as a “rug pull.” Jason Miller, the CEO of Gettr, marketed the site as a “free speech” platform for Trump supporters. Then he enacted major censorship and openly pandered to the far-left. Tim Pool has described the censorship on the platform as being more strict than Twitter.

Gettr continues to have software bugs and is plagued by spam bots from Asia.

Truth Social had an abysmal launch, with the site plagued with major problems for months on end. The site’s app is only available on Apple. Google is refusing to list it. 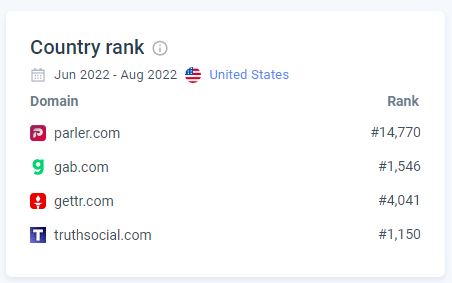 Texas Governor Greg Abbot has been hyping a piece of legislation to “ban” tech censorship in Texas. The bill is Senate Bill 12, which was introduced on March 1st. The bill is a long shot that would […]