We previously documented the 64 worst mass killings of 2022.

If you believe we missed any (Four or more victims with three or more fatalities) from January-September, send us a message.

On May 21st, Salvador Ramos, 18, carried out a massacre at an elementary school in Uvalde, Texas. He was eventually killed by a US Border Patrol agent. Ninety of the people are killed are young children. The adult fatalities are two teachers and the perpetrator’s grandmother. 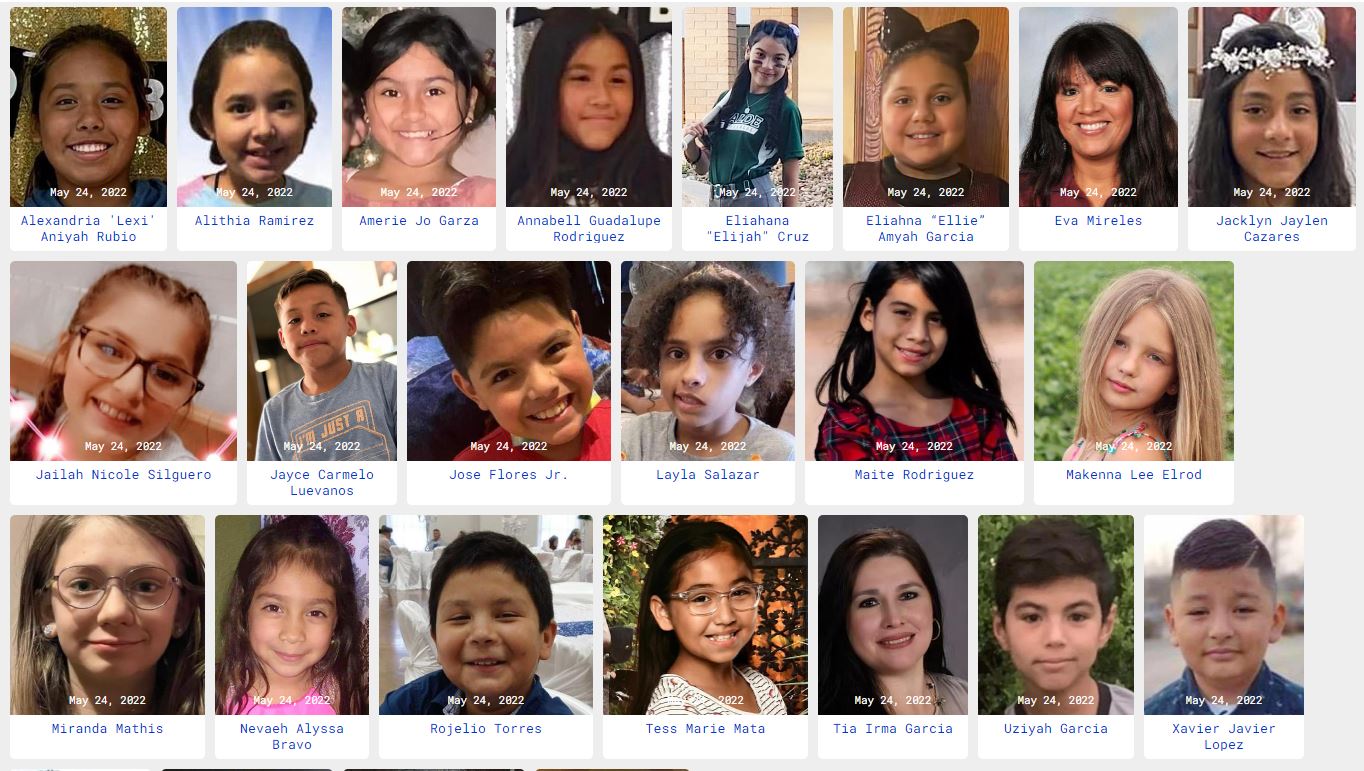 On May 14th, thirteen people were shot at a grocery store in Buffalo, New York by Peyton Gendron, 18. Ten people died. The shooter live streamed the massacre on the internet. The shooter wrote a manifesto saying he would target Black people because he didn’t like them. He appears to have been a copycat of the Christchurch, New Zealand mass shooter who targeted a Mosque and live streamed it. 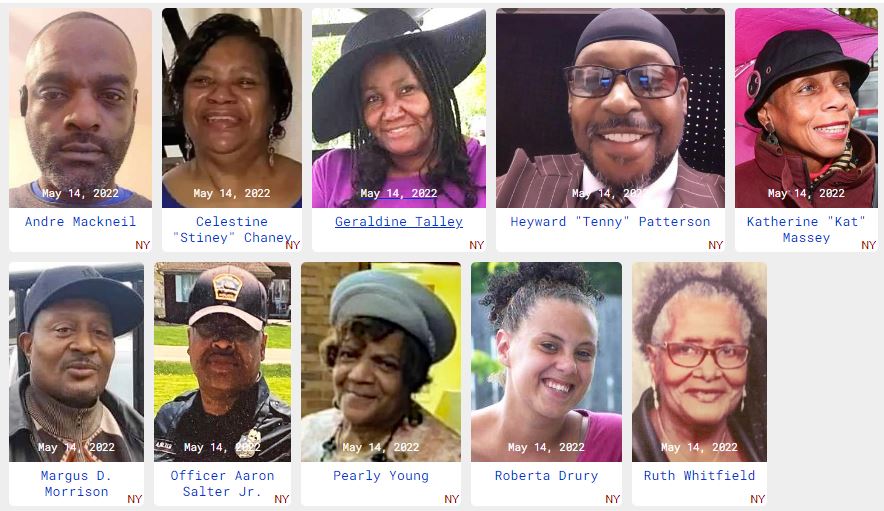 On October 27th, in Broken Arrow, Oklahoma, Brian Nelson, 34, killed his wife and six children. He set the house on fire and committed suicide afterwards.

On January 23rd, in Milwaukee, Wisconsin, six residence of the same duplex were found murdered. Police quickly ruled out a murder suicide. On January 27th, it was announced that four Black males were arrested as “persons of interest.” However, the media stopped all coverage after that.

Five or Six killed, eleven or more injured in CA:

On April 3rd, a mob fight in the entertainment district of Sacramento escalated into a gun battle. At least 74 rounds from five different guns were fired. Six people were killed. Five are known to be innocent victims. One of the fatalities may have been a shooter himself. Twelve people were injured. At least one of the injured is a suspect. Two brothers, Smiley Martin and Dandrea Martin have been arrested. Smiley had a handgun that was modified to shoot full auto.

On November 19th, a man opened fire in a gay bar. He killed five and injured seventeen others before being subdued. The perp is Anderson Lee Aldrich, who is part of the LGBT community himself.

On February 5th, Kevin Milazzo, 41, shot seven people in Corsicana, Texas. Two of them died. He committed suicide afterwards. The victims are relatives, a stepfather, and the son of his ex-girlfriend.

On October 9th, five people were shot and killed inside a house in Inman, South Carolina. The suspect is James Douglas Drayton, 24. He was arrested the next day after committing armed robbery near Waynesboro, GA.

On September 29th, five people were killed in McGregor, Texas. The suspect is Nicolas Jaimes-Hernandez, a 35 year old Latino male. The victims are four women ages 14 to 47. The fifth victim is a 15 year old male. Four of the victims are all from the same family.

On June 2nd, Gonzalo Lopez murdered a family of five after invading their home in Centerville, Texas. Lopez had escaped from police custody right before the massacre. He died in a shootout with police afterward.

On September 7th, four people were killed and three were injured in Memphis, Tennessee. The suspect is Ezekiel Kelly. The suspect had been charged with first degree attempted murder in 2020, but only did eleven months after a sweetheart plea deal.

Four killed, one injured in CA:

On January 23rd, two Black males opened fire of a birthday party in Inglewood, California. It is unclear if the perps have been arrested yet. The media ceased coverage of the mass shooting after two days.

Four killed, one injured in FL:

On June 1st, Michael Louis, 45, shot and killed four people in a hospital in Tulsa, Oklahoma. He blames one of his victims, Preston J Phillips, for botching his back surgery. Louis was then shot and killed by police.

On November 20th, four Chinese nationals were killed execution style on a cannabis farm in Hennessey, Oklahoma. Wu Chen has been arrested and charged.

On August 2nd, Donovan Michael Ramirez killed his wife and three daughters. Then he committed suicide.

On October 7th, four Black males were found shot execution style inside an SUV in Fort Worth, Texas. Police believe the shooting stemmed from gangs and drugs. One of the victims was facing charges that he shot and wounded two pedestrians last May. He had been released on bond. Police are looking for one or more Black male perpetrators. 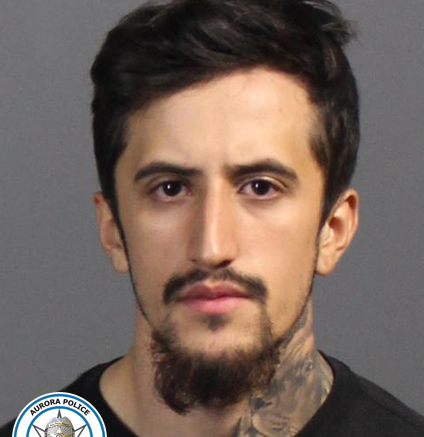 On October 30th, in Aurora, Colorado, four people were killed. Joseph Mario Castorena, 21, is accused of killing his girlfriend and three other people.

On May 27th, Charles Robert Gillard, 51, murdered four family members in Stanwood, Michigan. He tried to commit suicide afterward, but only injured himself.

On April 27th, a gunman murdered four people in a Biloxi, Mississippi hotel. He killed the owner, two employees, then murdered another guest to steal his car. He later barricaded himself in a gas station. After a two hour standoff with police, he died of smoke inhalation. The killer was Jeremy Alesunder Reynolds, 32.

On August 5th, four people were killed at a home in Dayton, Ohio. The suspect is Stephen Alexander Marlow.

On February 28th, David Mora Rojas, 31, shot and killed his three daughters and an adult male at a church in Sacramento, CA. He committed suicide afterwards. Rojas was an illegal alien who had been arrested before but not deported. He used a homemade gun.

On April 21st, four people were killed in Mountain View, a rural Arkansas town. Donnie Trammell has been arrested. Two of the victims are his parents.

On November 4th, four people were killed in La Plata, MD. Andre Sales, a Latino, killed the mother of his two children, Sara Mann. He also killed three other people in the house and committed suicide.

On June 7th, four people were killed in Portsmouth, Virginia. The shooting took place after two Black males storms into a boarding house. So far, no arrests have been made.

On April 20th, four people were shot and killed in Duluth, Minnesota, two of them children. The suspect is Brandon Taylor Cole-Skogstad, 29, who is related to the victims.

On June 4th, multiple people opened fire at each other in a crowded Philadelphia intersection. Three people were killed and eleven wounded. As many as thirteen of the victims are believed to have been unintended bystanders. They range in age from 17 to 69. Four Black males have been arrested and charged, including  Quran Garner, 18, Nahjee Whittington, 17, Qaadir Dukes-Hill, 18, and Rashaan Vereen, 34.

On June 12th, three people were killed and four injured during a mass shooting at a rap concert in Los Angeles, California. The concert featured Moneysign $eude, who is signed to Atlantic records. The victims are three Black males. Police are looking for a Black male suspect.

On Sunday, May 8th, three people were killed and three wounded in Clarkston, GA. None of the victims have been identified by police or media. This is a rural town that has been described as “the most diverse square mile in America.” Almost no media even covered this mass killing. It took place at an apartment complex. One of the wounded is said to be in critical condition. Police say the main suspect is 21 year old Ajang Rauch. Ofieo Ojego, a 25 year old Black male, has also been charged with being his accomplice. Clarkston, GA is a rural town that has been heavily targeted by “refugee resettlement” groups. This caused the population to nearly double between 2010 and 2020. From 7.5k to 14.8k. The 2020 census bureau lists the town as 7% White, 60% Black, and 26% Asian.

On June 9th, a gunman killed three co-workers at the Columbia Machine Manufacturing plant in Smithfield, Maryland. He wounded a fourth co-worker and also wounded two police officers. The suspect is Joe Louis Esquivel, 23, who police describe as Latino.

On August 28th, a man set a Houston apartment complex on fire. As people fled, he opened fire on them. Three male victims were killed. Other people suffered burns. The suspect, Roy Cravin, was eventually shot dead by police. The suspect is a 41 year old Black male. The local media is not showing any pictures of the perp or the victims.

On June 5th, five people were shot at a family BBQ party in Saginaw, Michigan. Police have not released any details on a suspect.

On March 19th, five people were shot outside a hip-hop concert at Chicho’s Pizza Backstage in Norfolk, Virginia. The victims are Sierra M. Jenkins, 25, Marquel Andrews, 24, and Devon M. Harris, 25. Jenkins was a former CNN employee and a current reporter for the Virginia-Pilot newspaper. The suspects are one or more Black males. Police are still investigating and have made no arrests. 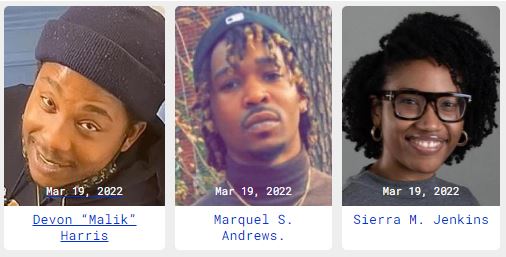 On September 4th, three people were killed and two more injured at a house in St. Paul, Minnesota. Police had been called to the house seventeen times in the past year. Anthony Dupree was arrested and charged. The fatalities are a Black male, a Black female, and White female.

On August 18th, three people were killed and another two injured at an apartment complex in Norfolk, VA. The victims are all Black males. Police are looking for a Black male suspect.

Three killed, one injured in MI: