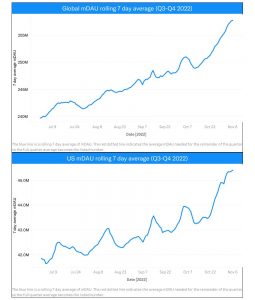 Recent excitement has caused a surge in daily Twitter use within the USA and worldwide.

Twitter’s most important metric is Monetized Active Daily Users [mDAU]. This is the number of daily users being served advertisements and creating revenue for Twitter. Twitter gets most of its revenue from America and Europe, while users in third-world nations are much less likely to be monetized. mDAU has surged in the USA and worldwide in the past four months, and especially since the acquisition took place.

Numerous celebrities have claimed they are leaving Twitter forever. So far, Whoopi Goldberg and Gigi Hadid are the only ones who appear to have deleted their account.

Mick Foley claimed he was deleting his account but only deleted one of two accounts and is still using the second one.

Many others claimed they have left, but their accounts are still active. Some have switched their accounts to private, so if they start tweeting again, the general public won’t see it.

The Orland Police Pension Fund filed a lawsuit in Delaware Chancery Court to stop the shareholder buyout of Twitter by Elon Musk. The Pension Fund claims there are two conflicts of interest. One between Jack […]

Rasmussen: Only 13% of Americans think Musk’s buyout is bad for Twitter

Many corporate media pundits and professional activists that Musk’s buyout of Twitter as a major calamity, if not a threat to our very way of life. These people represents only 13% of actual Americans. Rasmussen […]